Now I've written many blog posts in the past to do with my self-published books and recently one to announce ZA and it's arrival in the world, and it's got me thinking about how dreams warp and change as we do.

When I first started writing, my dream was to finish a book. Then a trilogy. Write five books. Write ten. Now I'm not sure I'll hit another goal until I've written twenty-five, fifty, a hundred. What I do know is that I won't stop setting them.

I'm one of those people who loves to set huge goals and then race towards them with little time for celebration once the end has been reached. I might have a tiny celebratory whoop with my hands in the air before I move straight onto the next thing. When I was fifteen and I wrote the final full stop of my first novel, I mourned for a few days and then asked myself, so what should I write next? The answer to that was, a book's not challenging enough, let's write a trilogy.

Then when I was in the midst of doing that, I decided the next thing was to get published. Of course, I got rejected over and over (who doesn't?), and now with that beautiful thing called hindsight, I know my books weren't ready. But that didn't stop me ploughing towards my goal. I self-published all three of the trilogy, which was exhausting and stressful and . . . well, either you know the joy and pain of the self-publishing world or you don't. Let's just say I had mixed feelings.

So why wasn't I satisfied?

Here I am typing this now, co-director and editor-in-chief of Molten Publishing, and I think maybe I'm getting somewhere. Sharing my knowledge with people and going around talking about books seems to be giving me much more joy than these stupid targets ever did.

Don't get me wrong, writing is my ultimate passion, and there's nothing like writing--and finishing--a book, but now I'm a little older and a little wiser, and I know that dreams aren't always what they seem.

I have officially landed in the publishing world, and I'm so excited to see what everyone thinks of Zane and ZA. And this time, I'm making the most of it.

Here's hoping my little whoops get louder. Maybe next time you'll hear them . . .


ZA will be back in stock on Amazon in September! Watch this space! :) #ZAReady 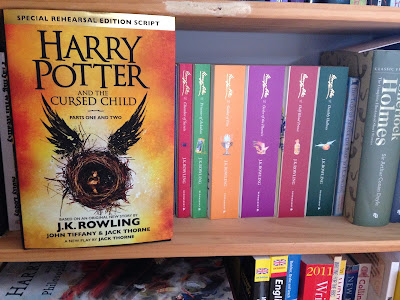 I know a lot of people loved The Cursed Child and a lot of people were disappointed by it and that's fascinating to me. I thoroughly enjoyed reading it, and it made me want to watch the play even more than I already did!

It took a little while to get into the format. After all, I've never read a play for pleasure before. I wouldn't call it a challenge to read, it was more of a challenge for my imagination. But as usual, I relish challenges. It was a little bit bizarre not to have any description, and a lot of people felt like it lacked 'magic' because of it, but I'm a dialogue girl, so I got on with it really well. It was exciting to read something not quite like anything I've read before.

I laughed more than I thought I would. Maybe more than I was supposed to. Not sure if that's a fault or not. It might just be me. Those Potters are still full of sass.

It didn't take long for me to be speeding through the pages. I couldn't turn them fast enough. I was so desperate to know what was going to happen next. I got so into Act Two that I actually felt my body growing hotter and hotter. At one point I shouted at the book like an idiot. I was so invested that I kept gasping. I did it so much that I started to annoy my fiancé.

Although I wanted to stop and savour it, for the life of me, I couldn't. I actually couldn't stop myself. And once I realised that I felt like an addict. I wanted to savour each page because I knew I could only have the experience of reading it for the fire time once, but nothing could stop me from devouring the pages. This book made me an addict. A regular reading junkie.

However, for most of the book I wanted to follow round adult Harry, Ron, and Hermione and that really isn't the point. It took much longer than it should've for me to become invested in Albus, and that kinda made me think I was focusing on the wrong thing. Don't get me wrong, I loved Albus. Though Scorpius Malfoy was easily my favourite character, and I am not alone in that opinion!

I did start getting jumbled at times, but at least I could stop and think about it. I'm glad I read the script first. This way I know I won't get confused!

Just one final thing, I know a lot of people are criticising this book by saying it reads like fanfiction, and it does, they're not wrong, but really? It's been nine years since we've had any Potter, and it's set well after the Deathly Hallows, so I don't think there would've been any way to avoid it sounding this way.

Whatever people think, I don't care. I loved every page.


Waking up in the middle of the night to write something down.

Re-reading old notes and wondering what you were thinking.

Not writing something down and regretting it.

Having incredible ideas whilst out walking, in the shower, watching TV. Sit in front of a computer: nothing.

This is the best thing ever! Everyone will love this! This is the worst thing I've ever written. Why would anyone be interested in this rubbish. Repeat.

Constructing fantastic sentences on paper. Sounds like you don't know English when you speak.

Write thousands of words and feel like a superhero. The next day you write three sentences and want to go back to bed.

NaNoWriMo is a word you both love and hate to hear.

What's that word? Oh no. I know it's a word. Check Thesaurus. But I swear there's a word that should be here!

What an awesome backstory. So excited to reveal it. Never reveal it/ reveal too much and ruin character.

But that's not what they would do.

Where's that notebook? Search through twenty and get distracted.

Spending hours researching something complicated and never using it in the story.

Bored of having to explain to people why you won't be the next *insert famous author*.

Talk about writing because someone asked, only to realise they stopped listening.

Why don't you write *insert genre you do not write*?

Getting halfway through a story and three new ideas pop into your head.

Finishing a story and all other ideas vanish.

Writing something you're proud of only for your first reader to hate it.

Reading over your old work and cringing.

Where is this story going? Somewhere good I hope.

Spending all day writing and someone asks how much you've written: "that's not important."

The pressure of writing competitions is too much.

Staring at a computer screen all day but not touching the keyboard nearly enough.

Having to look up grammar rules because you're doubting yourself.

Questioning the very fabric of the universe.

Picking apart the human psyche and discovering that humans are disturbing.

But I wouldn't change my hobby for anything.

Before you read my review, you should know that The Last Star is the 3rd book in The 5th Wave trilogy (which you should read right now!). You have been warned.

I was half excited and half terrified to read The Last Star. I loved every sentence of this series, and I didn't want it to end. Plus, I knew if I read it, characters were going to die. But I had to brave it. I couldn't put it off any longer, even though I knew it was going to break me.

For some reason, it took me a little longer than normal to get into it. Maybe because I was terrified. But once I got into it, I felt myself reading too fast, but I didn't know how to stop. I did get to a point where I almost put the book down because I knew I was getting closer and closer to the end. I almost put the book down to save it. Almost. But I couldn't. I had to cover the words with my hand until it was time to read them. It was almost impossible to resist the urge to look ahead.

As with the previous two, The Last Star surprised and wowed me with little bits and pieces. Some of the sentences were just so right, they really struck home. As usual, such beautiful observations. Humanity has never been torn down and ripped into its bare basic form as much as it is in The Last Star. It's a masterpiece. Truly.

"No one tells you how close rage is to lust. I mean, the space between molecules is thicker."

As well as the beautiful thoughts and insights into human nature, the narration, as usual, was spot on. I've said it before, and I'm going to say it again, I totally adored Cassie's narration. It's so perfect. She couldn't sound any more real than she already does. And I'm so jealous of Yancey's skill.

The Last Star really is a rollercoaster ride. One minute I was laughing, the next I was trying not to cry. At one point, I had to put the book down to have a little cry. I've cried at many books in my time, but hardly ever have I had to put a book down to do so.

I'm not sure I have enough words to express how phenomenal this series is. There are literally no words for how mind-blowing The Last Star is. It made me think about life, love, fear, hope, faith, humanity. Everything. Like The Infinite Sea before it, this book tore me down and rebuilt me. Better. Stronger. This book did more than keep me entertained for a few hours. This book became me. I can't explain it any other way.
I am Cassie.
I am humanity.

I wanted to weep like a baby when I finished. I need a stronger word than beautiful. But that's all I have. Beautiful. I wrote down three goddamn pages of notes, and it'll never be praise enough.