Maybe you can tell by the less than exciting title but to answer your question, no.  I didn't win.

But I' proud to say I picked her out in May as the winner (taking into account if it wasn't me).  The winning novel is called 'The Name on Your Wrist' by Helen Hiorns, which was released on the Sony Reader Store on Monday but I believe will be available via other routes as of tomorrow. 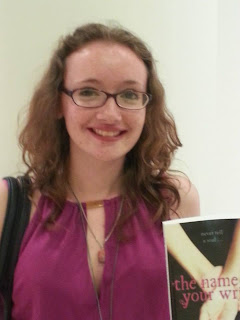 Once I've read 'The Name on Your Wrist' I will review it but I'm still in the middle of reading a book right now so it might be a little while yet.  But because I believe Helen deserves your attention, here is the 'about the book' from the Sony website:


It's the first thing they teach you when you start school. But they don't need to; your parents tell you when you're first learning how to say your name. It's drummed into you whilst you're taking your first stumbling steps. It's your lullaby. From the moment it first appears, you don't tell anyone the name on your wrist. In Corin's world, your carpinomen - the name of your soul mate, marked indelibly on your wrist from the age of two or three - is everything. It's your most preciously guarded secret; a piece of knowledge that can give another person ultimate power over you. People spend years, even decades, searching for the one they're supposed to be with.

But what if you never find that person? Or you do, but you just don't love them? What if you fall for someone else - someone other than the name on your wrist?

And what if - like Corin - the last thing in the world you want is to be found?

The gripping debut novel from the winner of the inaugural Sony Young Movellist Award.

What I've read so far I liked but if you've read my previous review of Gemma Malley's 'The Killables' you'll know I can be quite harsh.  Let me tell you, I won't sugar-coat my review of  'The Name on Your Wrist' because I was at the awards and everything, I'll be honest.  (And I won' be harsh on purpose either.  I'll put my jealousy on hold, I promise).

So you're probably wondering about the night itself?  After putting on my new dress and straightening my hair for once, we were off to London, baking ourselves to death on the Tube.  The awards took place in Kings Place which was a beautiful venue, although with some weird looking paintings around the walls.  We arrived - me, my mum and my dad - and received our stickers which I have kept.  I'm more than proud to say that mine said:

We took our drinks and stood around looking at all the people that were there - more than we were expecting.  I then met Zohra Hasham who I'd emailed in the past week or so regarding the videos that the shortlisted ten had to make.  She was so lovely.  It was so cool and so weird to meet the people I'd been contacting since May.  And I must say, everyone was so friendly and welcoming.

The physical 'Awards Ceremony' didn't take that long at all.  The award was introduced and Annie Eaton spoke for Malorie Blackman who couldn't make it and our videos were played.  I was surprised that I didn't die with embarrassment when mine was played but it didn't seem embarrassing at all once I was there - thank god.

Here's the link to the videos:
http://www.youtube.com/watch?v=BO2THoxJ3wI&feature=youtu.be&a

The three finalists were announced and then it was announced that Helen had won.  The runners up were Kyra Schlachter with 'My Corrupted Lungs' and Emma Yeo with 'The Girl with a Thousand Faces'.  Helen gave a short speech and accepted the trophy that had been made.  Then we were back where we'd been standing before.  It felt almost as though it was too short.  In hindsight, I was glad.  I didn't want to be sitting down.  I wanted to be walking around and talking to people if I had the guts.

Lucky for me, my dad is good at that sort of thing as he teaches people how to present, and soon enough I was talking with Rebecca Davies from the Independent and Holly Kyte from the Telegraph.

I soon got called over to have a picture taken with the other nine shortlistees and our novels.  (I'm the one in the very middle with the black and white dress) 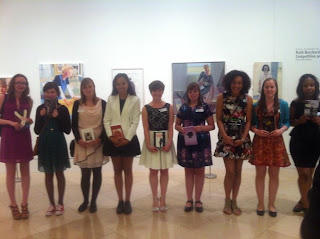 Oh, I forgot to mention that Completely Novel.com printed a copy of our novels for us.  I'm not sure I could've been given a better gift.  We were also given a Movellas tote bag with a copy of Malorie Blackman's new novel 'Noble Conflict' and a code for a free copy of 'The Name on Your Wrist'.  I'm sure all the shortlistees would agree with me that the printed copy of our novels was the best gift of the evening. 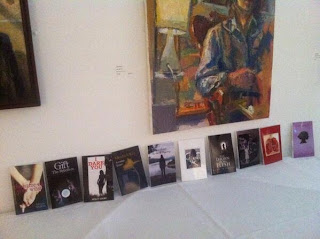 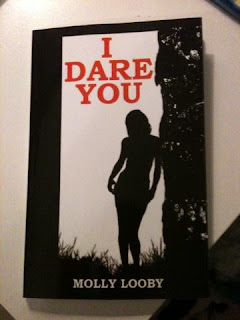 I got chatting to Emma Yeo (runner up, author of 'The Girl with a Thousand Faces').  We ended up talking for a long time and I enjoyed her company, almost like I ﻿needed it.  After chatting to the other shortlistees (but mainly Emma), I felt so much better about myself as we were all saying to each other:
"I loved your story!"
I think we all needed that. 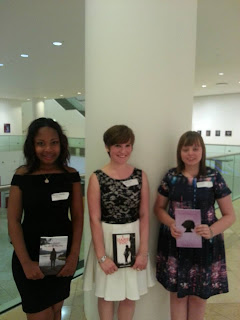 Everyone who spoke to me who recognised my book called it 'Havengore'  instead of  'I Dare You' but I didn't care.  Whenever anyone said:

"You wrote Havengore, right?"
I felt like I could fly because not only did that mean that they knew of it, it also meant that they'd remembered what it was about out of the ten.

On this point, when I come to look at 'I Dare You' in more depth (probably at the end of the year or maybe even next year) I'll consider changing the title to 'Havengore'.  That's what everyone called it so it clearly stuck in their heads more than 'I Dare You'.

I then got the privilege of talking to some editors from Random House who were great.  I would love to be an editor so I managed to get an email address with a possibility of work experience which I'm thrilled about!

I also got to speak to Yvonne Biggins from Movellas who was also very friendly and lovely.  I'm hoping to do work experience with the lovely people at Movellas also.

All in all, I had an amazing time at the SYMYA and I wouldn't swap the opportunity I had to meet some wonderful people for anything.  If this is another part of being an author, I love my job even more.

Got something to say, want me to do some freelance work or perhaps to tell me something I might not know about writing (go on, test me!)  Email me on:  molly.looby@hotmail.com
Ramblings of Unknown

Email ThisBlogThis!Share to TwitterShare to FacebookShare to Pinterest
Categories amwriting, Helen Hiorns, I Dare You, Molly Looby, Movellas, SYMYA, The Name on Your Wrist