United as One - Pittacus Lore 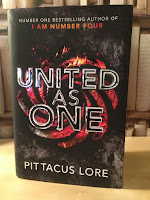 United as One is the seventh and final book in the Lorien Legacies series. I implore you to go and read them! They start with I am Number Four.

There's always a huge sense of dread when you pick up the final book in a series. It could be incredible and everything you wished for. Or maybe it's not going to live up to all the hype you've got inside you ready to burst. It's always tough picking up that last book. When I looked at the beautiful hardback edition of United as One, it filled me with this exact feeling of dread, as well as excitement to pick it up, and sadness that it was almost over.

But whoa, what a ride.

From the beginning, I felt this big weight of tension. It's all come down to this, and I was a little terrified. No, little is an understatement. After each of the first few chapters, I had to stop and steel myself for the next one. I couldn't be any more invested. I was fully involved and ensnared by this universe.

The whole thing is tense from start to finish. I thought the previous book (The Fate of Ten) was hard to put down, but this was on another level. This time, there weren't as many places to breathe. I read a lot of it with my hand covering half the page so I couldn't read ahead. I just don't have the words to describe this level of tension. It was crushing. I was gripping the book tight, my heart pounding, face getting closer and closer to the page.

Lore made it painfully obvious that none of the characters were safe, and that put me on edge even more. I knew that if I read on, people were going to die. Usually, you can name at least one character that you know will survive until the end. Not in United as One. Anyone could go at any time. And that was petrifying.

And yep, there were tears. Oh yep.

What a mad roller-coaster it was. I finished the whole thing in under 48 hours. A sense of horrible loss swallowed me up when I turned the final page but also satisfaction as, at last, everything was tied up.

All I can say is bravo, Lore. Bravo.

Email ThisBlogThis!Share to TwitterShare to FacebookShare to Pinterest
Categories book review, Lorien Legacies, Pittacus Lore, United as One, YA 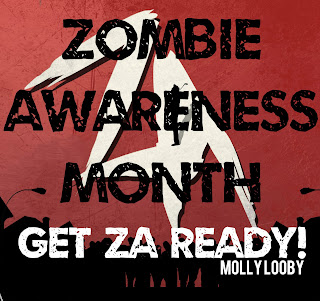 So Zombie Awareness Month has come to an end for another year. This year I managed to get a lot of zombie-related stuff done during ZAM, so I thought it deserved sharing.

Of course, to start off, I shared some of my favourite ZA quotes on this very blog.

I had fun with my throwback Thursdays too, posting a picture of the Zombie Run I went on in 2012, the amazing event I had at the Chicken and Frog bookshop for ZA last year, as well as my ZA book signing at Waterstones!

I also reminded all of you that I wrote a blog about my top five zombie books, films, and games on Movellas. (You can read it here.)

The best part of this year's Zombie Awareness Month was being Waterstones's YA book club book for May! And what a perfect time for it! I was asked along, and it was an amazing experience. It was so great to talk to people who know all the spoilers ZA has to offer. Usually, I have to be careful with what I give away, but it was so freeing to be able to discuss any part of the book! It was also fascinating to find out what they thought of each character. Of course, Gemma was the clear favourite (I was in no doubt). It was also great that for most of them, ZA was their first zombie book. I'm sure I've opened up a door for them to discover some truly amazing zombie books!

The next most exciting thing was my Zombies, Run discovery. Zombies, Run is a fitness app I suppose. You go out running or walking, and you get the story in your headphones while you're out. As you go, you pick up bits and pieces of equipment that when you finish the mission go back to your camp. But the absolute best thing is the zombie chases. At random intervals (or as part of the plot), zombies will chase you and you have to pick up your pace to survive. I've never enjoyed running until now, and I'm finding myself dying to go out again! 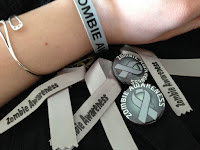 And of course, I wore my Zombie Awareness Month bracelet and explained to people who asked what that was!

Until next year, survivors. Speaking of which, you can join my ZA survivors here. Stay ZA ready!