Before I Fall - Lauren Oliver

If you got to live your last day again, what would you do with it?

I was excited to pick up this book having read a teaser for it in the back of Delirium.  But I was also cautious because I loved Delirium but didn't really care for the rest of the trilogy.  Brace yourselves, I may have loved Before I Fall even more than I loved Delirium.

Before I Fall starts of with Sam's typical day at school and we learn that her and her friends Lindsay, Ally and Elody aren't very nice people.  They're your average popular bitches you hated at school.  Think Mean Girls.  Sam and her friends were the plastics.  But even though I was reading about these people I didn't like, I wanted to follow them - much like the other characters in the book.  I don't know whether this is because I never saw the popular side of school and it was amazing to me.

Of course, as you can imagine, as the book went on, I liked Sam, our protagonist, more and more as she realised that she wasn't good person.  Sam stepped up and wanted to make sure people remembered her as a good person, even if she's only got that one day to turn it around.  I forgave her as she hadn't realised before what she'd been doing to people.  Her best friend Lindsay on the other hand, I hated more and more and more.  She was cruel and a liar and I didn't want to read another sentence about her by the end of the novel.  But as a contrast to Sam's character it was done beautifully.  It was brilliant how much I hated her.

The actual plot itself was outstanding.  When I realised it was like the film Groundhog Day I got stupidly excited.  Oliver managed to find the perfect balance because amazingly, replaying this day over and over never got repetitive - well not in a bad way.  If anything I got increasingly breathless with each repeat, the feeling of dread growing more and more intense.  There were different details each time so I was constantly building up a picture of all the threads of this one day.  It was incredible to think about all the different things happening at any given moment.  It really made me stop and think.  I was completely blown away by the description of how a person can feel in a moment.  I've always admired Oliver's perfect description.

Would I recommend it? - It was just awesome.  Yes.

Would I look up the author? - Yes.  I already have done but I've added another Oliver book, Panic, to my wish list!

Before I Fall was beautiful, thought-provoking, heart-warming and heart-breaking all at once.

Email ThisBlogThis!Share to TwitterShare to FacebookShare to Pinterest
Categories Before I Fall, book review, Lauren Oliver, YA

The Other Life - Susanne Winnacker


I believe all you need to be intrigued about this book is the first part of the blurb.  Nope, not even the whole blurb.  This is all that pulled me in and made me part with my money.


First, I’d like to congratulate Winnacker on writing a ‘zombie novel’ that was different from the other zombie novels I’ve read (and written).  I think that’s the hardest part about writing about zombies.  How can you do it in a way that no one’s seen before?  Well Winnacker’s Weepers were terrifying, super human, animal zombies, nothing like I’ve read before.  She kept me guessing and kept me reading.  I suppose the word ‘zombie’ isn’t even correct for The Other Life.  The Weepers were so much more.

You get thrown into The Other Life by meeting Sherry and her family in the bunker they’d been hiding in for three years, having no idea what had happened above ground.  The claustrophobia in the bunker came out and I wanted to get out as much as Sherry did but it was a brilliant way to learn about her and her family before they left the bunker and met new characters.

Speaking of them, the characters were all really relatable and different from one another.  It was great for a change to not be confused at first by the new group of characters that had been thrown at me.  They were introduced just the right distance apart and their names and descriptions were all different enough that I knew who everyone was without having to wrack my brains every time they appeared on the page.

I loved the way that Sherry was welcomed with open arms into Safe-haven.  It made so much sense for the characters that inhabit the place.  I was worried that they wouldn’t trust her and want to get rid of her but I think I’ve been watching too much Walking Dead as my worry was unfounded.

The description of the broken city was wonderful and I’m not usually a description fan.  I could see everything before me.  The empty roads, the abandoned buildings, the crumbling streets.  Just excellent.  Another reason I didn’t want to put The Other Life down.  Every part of it gripped me, even the description.

The brief snapshots of Sherry’s other life before the virus contrasted beautifully with the chapters they preceded.  Those pages were filled with safety and meaningless fears.  They made sure that you never forget that in their new lives, none of the characters were safe.  The stark contrast made me realise how naive and thoughtless we all are.

Of course, as I’ve mentioned I could hardly let the book out of my grasp, it had good pace.  From chapter one in the bunker I was hooked.  There was just the right mix of action and human emotion for me.  After all, my favourite thing about zombie novels is the way the characters react to the situation around them and how their relationships change.

Style - 9/10 – Loved Sherry’s narration, I felt she was relatable and realistic

Pace -9/10 – Excellent, maybe a few chapters were a few pages too long though


Would I recommend it?  Yes.  If you like zombie books that aren’t really zombie books, full of apocalypse and survival, this is the one for you.

Would I look up the author?  Yes, I can’t wait to read the next one: The Life Beyond.

The Other Life was everything I wanted it to be and I could read it over and over.

Nick lives a normal life until his classmates start eating each other.  All of a sudden, pulled into the Dark Hunter universe, Nick realises his world is much larger and more dangerous than he ever imagined.

I found this book a LONG time ago and I can still remember the drive I had to read it.  I was super excited when I found it again recently on line because back when I first saw it I didn't have enough money to actually buy it.  That was a good sign straight away, after what must've been five years, it still sounded appealing to me.  This was also risky.  Could the book be as good as I expected to be?  For me, it was excellent, but then again it was my type of book through and through.

I don't know how Kenyon did it - maybe she's a genius - but I was with Nick from the first page and anyone who was against him was my enemy.  I was so angry at people for looking down on him because he was poor and from a bad area.  I've never been so angry at a character so quickly before so I immediately knew that Kenyon was doing something right.  Although I was with Nick all the way, I did get tired of his sarcasm and sass as the book went on.  It wasn't enough for me to stop reading, but I sort of wanted him to grow up a bit for the next book.  (I can only hope).  Don't get me wrong, he needed to be like that and it suited him as a character, I think it was just a bit too exaggerated during Infinity.

The other characters were awesome too, but it was a bit too bizarre for me that there were more demons than humans in Infinity - by a long way.  Plus, they all seemed to want something from Nick or wanted Nick himself, some for evil, some for their own gain, some for reasons I can't even remember.  It was very confusing and difficult to remember who was with who.  Saying that though, I did enjoy very much jumping into various characters heads for a page or two, I always came away liking them more.  I suppose that's the beauty of third person that doesn't usually shine through.  Well it did in Infinity.  When Kyrian and Acheron were introduced I knew this was the book for me and at once I expected perfection.

My proofreading/editor did come out a few times while reading Infinity.  A few sentences were left in that I thought didn't add anything and I would've cut.  Also once the character Eric was spelt Erik.  Just the once.  This one is just my personal opinion but other than this one sentence where the characters discuss a phrase with the word infinity in it, there was no reason for the title Infinity.  Same with Twilight if you ask me.  Why was it called that?  I suppose it makes more sense than this book being called Infinity.

What else can I say but this book had everything?  Dark Hunters, zombies (two kinds), vampires, gods, werewolves - everything.  This is my kind of book right here, ladies and gentlemen.  I can't wait to get round to reading book two.  Fair warning though, there are four books to date and I believe Kenyon is writing more (I've done a little research and her series are always HUGE!).  So if you don't want the commitment of a huge long book series, maybe the Chronicles of Nick aren't for you.

Characters - 8/10 - loved them all but got a bit confused

Would I recommend it?  Yes.  If you're looking for a new series packed with supernatural creatures, look no further.

Would I look up the author?  Yes.  I already have.  She has written a LOT of books.

Infinity was an action packed intriguing start to what I hope is going to be an amazing series.

It's that time of year again! For Zombie Awareness Month 2014 I'm going to promote ZA! 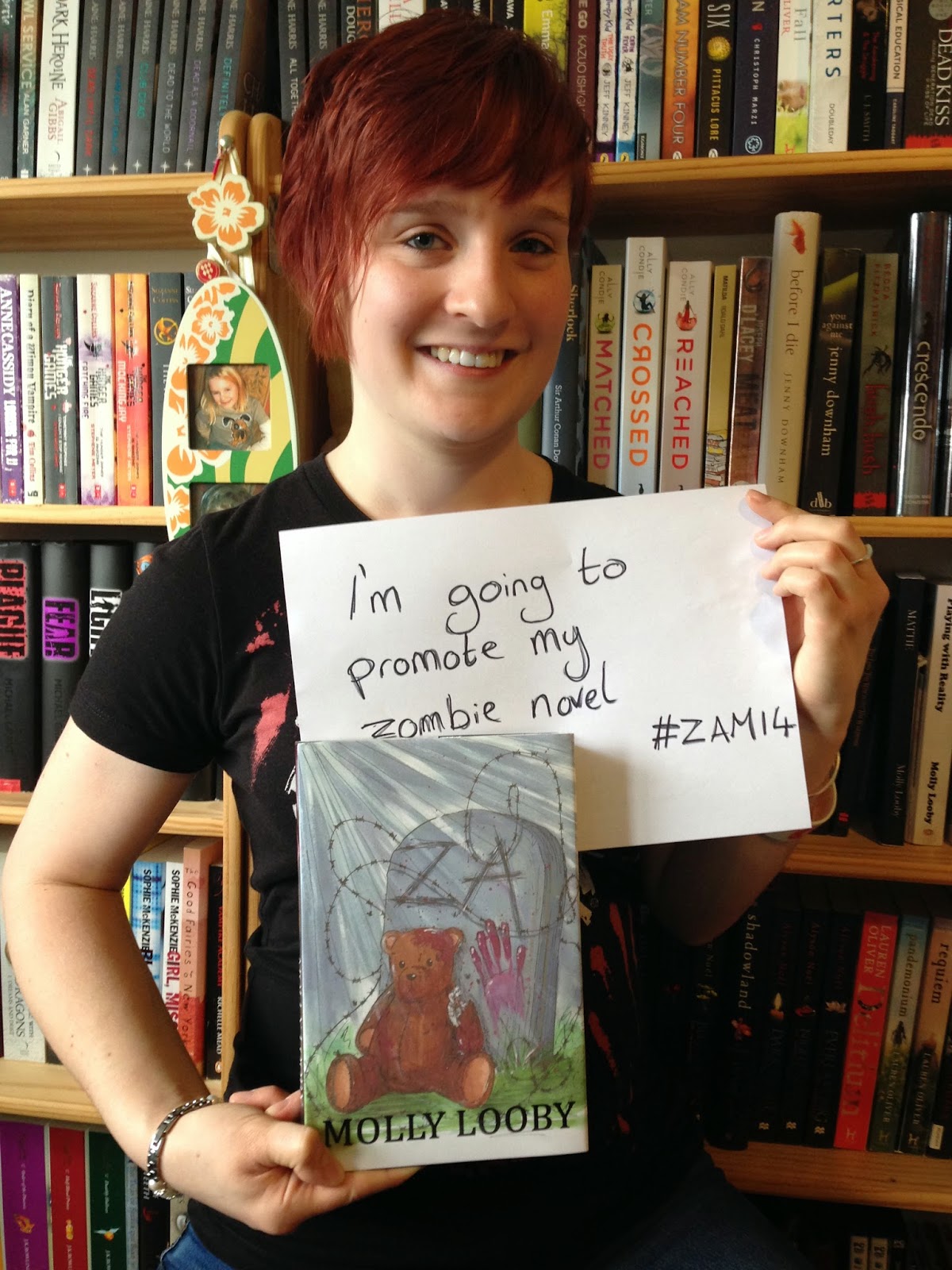 The Zombie Armageddon . . . yeah I know. How unlikely is it, right? “There are no such things as zombies.” I’ve heard it all before, but I’ll never hear it again. There are a few simple rules: Get supplies. Stay hidden. If they come, run. Fast. After all, this wasn’t a video game and we only had one life each.

If you haven't read it, what are you waiting for!  Honour ZAM by reading about a team of survivors.  You might find some useful tips that will help YOU in the Zombie Armageddon.  Life-saving advice for under £1?  How could you say no?

Drop me a review and let me know what you thought.